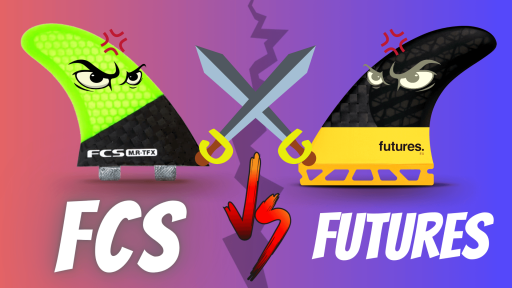 The battle of the Fins: Futures vs. FCS

Are you thinking about getting a surfboard and don´t know which fin system to go for? Futures or FCS plugs? Is there a difference between one system and the other? Which fin system is better? What advantages do the Futures fins have over FCS?

We´ll answer the great dilemma here, this problem that lots of surfer have when choosing their fin fixtures for their surfboard.

Without a doubt the most used worldwide. In our country, practically 80% of the surfboards sold use this system.

Originally designed at the start of the 90s, FCS or Fin Control System was a pioneer in the extractable fin systems. Its creation was a real revolution in the surf industry that let surfers change their fins easily to adjust it to the sea conditions. 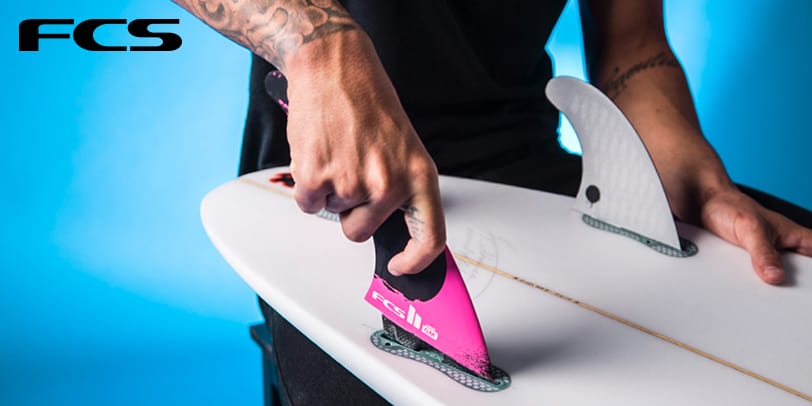 Very popular in the US. The second most used fin fixing system in our country. Some of their ambassadors are Jordy Smith, Clay Marzo and John “John” Florence.

Futures Fins is an absolute reference worldwide in surf fins. The Californian brand is leader in sales for high performance surfboards. Started in a garage in Huntington Beach in 1996. The Longo brothers, creators of the Futures Fins brand, had the fame of creating aerospace parts. In 1996 the decided to combine their technical knowledge from the aerospace world into the surf world. From this, the first Futures fins were born. A surf fin designed from innovative designs.

Today Futures Fins counts with a team of surfers from the highest international level. John “John” Florence, Rob Machado, Jordy Smith, Clay Marzo and Dave Rastovich are some of the surfer that will put their name and surname with these fins. Futures also offer a great variety of fins; SingleFins, Twin Fins, Fin 2+1, Tri Fin, Quad Fins, Five Fins.

Which is the better system for you surfboard?

Like everything else in life, it all depends on your taste. The reality is that Futures and FCS have been fighting for market share for a long time. These two brands have been going crazy trying to get new adepts into their ranks. But is there a true winner?

FCS has dominated the fin system option for a decade, but has never gotten a monopoly.

The brand has developed a large range of material to improve drive, hold and turn when on a wave. Their fins are made with the latest materials: ultra-light epoxy, composite core, performance core, performance glass and glass flex. Their gamble for innovation and technology has made them sales leader for many years. But… then came Futures Fins.

Without a doubt the biggest advantage over Futures, is the good work they´ve been doing. FCS was almost the only option at the start of the century. The fact that 80% of the surfboards are FCS ready in our country makes that most surfers have a few sets of FCS for each board.

The disadvantage of FCS

Surfers usually complain that the FCS plugs are worse than Futures, and that these usually damage the surfboard deck. The new Fusion plugs (FCS 2) were introduced precisely to stop the surfboard carnage.

Another complaint generally come from the security that Futures transmit compared to FCS, The fact that you have two fixtures vs. having one total fixture from Futures is noticeable.

Surf fins enthusiasts feel that Futures are stronger and more resistant. When they break they usually break at the base so all you need to do is replace the fin, instead of having to repair the surfboard.

Those that use Futures say that there is a more direct response from the board and feel that it´s more resistant since the fin is better secured, something that FCS has tried to correct with their new system, the FCS II. The Futures plugs are considered user-friendly or easier to use. You can mount and unmount easier.

The disadvantage of Futures

Today, it´s still easier to find shapers that work with FCS than with Futures. In fact, not all surfboard brands have the option to install Futures. We can practically say that FCS is the world standard. Now it´s true that this has been changing lately.

The majority of surfers have at least 5 sets of FCS fins. The jump to Futures implies a big investment since we know that surf fins aren´t exactly cheap. Prices range from 27 euros for plastic fins to 130 euros for a set of five or six fins,

Repair workshops are used to repairing surfboards with FCS plugs.

So Futures or FCS? It´s clear that in EnelPico we don´t have a preference for one brand or the other. Even more, we are sure that the average surfer wouldn’t notice the difference between the two fin systems. But if we were forced to choose one brand we would take, FCS, only if we were forced to. But if you are thinking of buying a twinfin then, Futures.

In Single Quiver we are cognizant that surf fins have become a luxury item. A set of carbon fins costs 80 euros on average. That why we have created a fins outlet where you can find the best offers for fins online. Get your Futures fins set starting at 41 euros. If you have doubts about which fins are best for you, visit our fin recommender.

The battle lines are drawn, which one will win? We will have to stay tuned for the next evolution of fins.