Basque Country Surftrip, the Best Beaches and the Best Waves 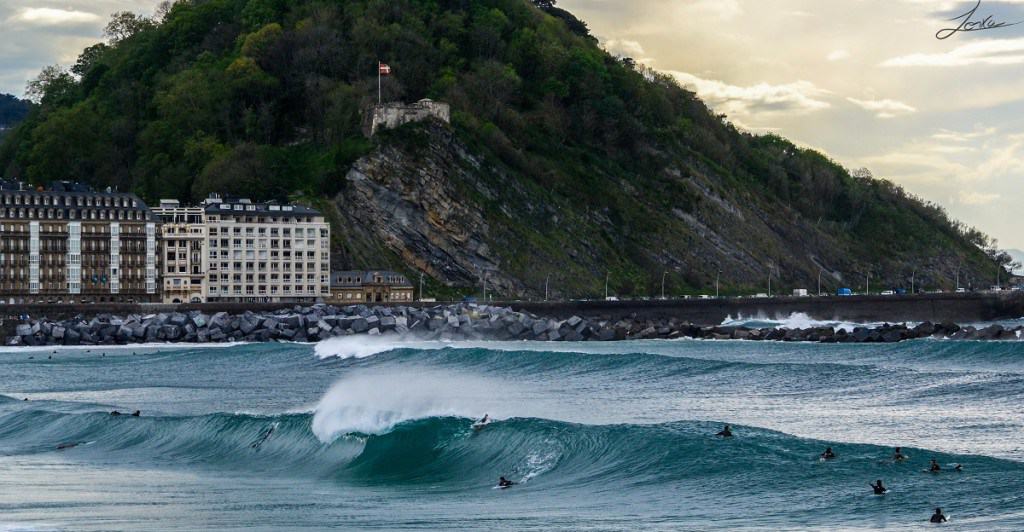 Basque Country, one of the biggest surf powers in European Surf

Basque Country counts with more than 250 km of coast. Full of sandy beaches and waves. A lot of them excellent for surf. Something that makes this place a great destination for a surftrip. Next we´ll tell you about the best beaches and the best waves to surf at.

When to go surfing in Basque Country?

The best season to go for waves in the Basque Country is between September and March. In the table we score the wave consistency with a 70% around those months. If you want good probabilities to surf good waves, we recommend you travel around those dates. Entering April, the wave consistency lowers. Then in the months of July and August, you may get some but nothing as good as the best season for surfing.

Even though summer is the time of the year when most people come to our coast and most people are doing aquatic sports or even learning to surf, it’s the season with less wave consistency.

The Basque Coast takes in annually half a dozen surf championships, some of them in the maximum category. This makes Basque Country a reference in Europe and Worldwide.

Which are the best waves in Basque Country?

Next we´ll briefly talk about the most important surfspots in Basque Country.

Considered as the best wave of Europe and one of the 10 best in the world. Located in the Biosphere reserve of Urdaibai. Mundaka proudly boasts of its famous left wave and it’s an obligatory stop for all kinds of surfers. When the sea enter with force and the waves are 5 meters tall, “the bar” is a spectacle and the local watchtower becomes a come and go of watchers and photos.

We now go to the Guipuzcoan coast. Specifically to what we consider the surf capital of the Basque surf. Zarautz has one of the best youth surfer scenes of Europe. The touristic villa situated in the center of the coast of Guipuzcoa houses important competition dates in the sporting calendar. It´s an ideal spot for initiation. Sandy bottom and full of surf schools, its another obligatory stop.

Located in Getxo, in the port exit of Bilbao, it was until last year the only European world headquarters for giant waves. It can offer sessions of up to 6 meter waves. Situated under the cliff of La Galea from which comes its name. The presence of rocks makes this not apt for surfers of any level. This year, despite its long waiting period, the surf tries had to be suspended. Not because of lack of waves, the organization had to suspend it because of the wind. Which ended being the factor that stopped the world competition. 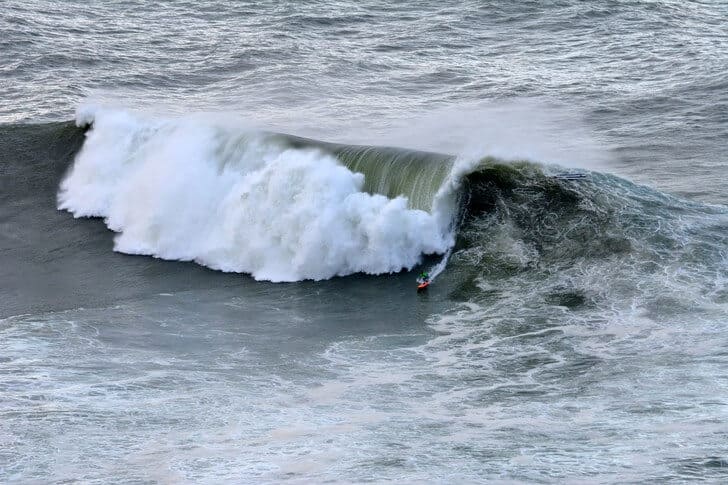 Possibly the biggest complete wave in Basque Country. Located in between Sopelana and Barrika. This wave can hold session of up to 7 meters tall. A real sanctuary for giant wave lovers. A jewel for experienced surfers, that can surf long walls while spectators are delighted with the show from up the cliffs from where they can see everything.

We continue with big waves. Its Roka Putas turn, a powerful and long wave that can reach 6 meters tall  with favorable conditions. Birthing place of big wave surf and one of the most visited spots by surfers from Zarautz. Situated in the road that joins Getaria and Zumaia. Can also be observed by fans from the cliff.

Possibly is in the top 5 of best known or popular waves. But we can´t forget other break points that are in some of the main beaches and make Basque Country an ideal place for surf.

This beach is located in Getxo. We highlight that the wave form la Triangu, a breaker that travels long and holds a lot of height (up to 3 meters). The access to this beach is done by one of the infinite stairs. But once you are below, the picturesque dunes, cliff and mix of rock and vegetation makes this one of the most virgin beaches in the littoral. Another one of the spots in this beach are la batidora and la corriente. This last one is located in the central zone of the beach, and receives precisely that name since its located in the principal current of the beach. 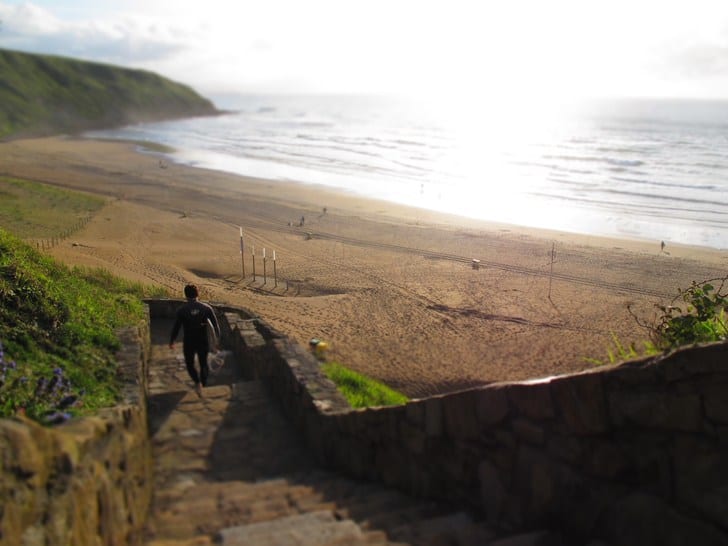 Also a municipality of the Biscay. Cradle for big surfers and HQ for international events. The consistency of waves all year long is the main point to highlight over this beach. The isle of San Juan de Gastelugatxe watches in the distance one of the most popular beaches during the summer.

It´s one of the most virgin and savage beaches in the Basque coast. Far from the urban centers and inside the Biscayan locality of Ibarrangelua. Right in the middle of the Urdaibai Biosphere Reserve, it’s the perfect enclave to start surfing.

The noble villa of Deba is a municipality situated in the northwest of the Guipuzcoan province. A good place to learn and practice your surfing, with left and right peaks that change depending on the sandy bottom.

La Zurriola couldn´t be left out f this list of surf beaches. One of the 3 beaches in the city of San Sebastian. Located in the city center, it offers quality waves and consistency all year long. With a younger profile, it´s also home of the Jazzaldi scene and, the bodyboarding , skate and surf competition.

The best beaches for beginners

For those that are looking for a place to take your first surfing steps, we recommend you read our post “The 5 best beginner beaches to surf at in Basque Country”. In this article we talk about easy and lofty waves, with sandy bottom, surf schools where you can rent material in case of it being necessary and apt for all levels.

What board do I bring to Basque Country?

It all depends on the month you visit. If you visit Basque Country between September and December, it would be recommended to bring an all-terrain board that works with everything. A 3DX from DHD type of surfboard, which you can read our review here or the DNA, a board used by Mick Fanning.

Another surfboard alternative for the Basque Country is the NED Kelly by Clayton or the F5 from Goldbeach. Anyway, before traveling we recommend you look at the wave forecast for those days and based on that choose a surfboard best suited for the occasion. These are the 5 best apps for wave forecast where you can check out all the information you need for you surf sessions.

What wetsuit do I need in Basque Country?

In the initial table we have guidelines over what neoprene wetsuit you should use based on the month you will travel. From January to February the water temperature will be around 12 degrees. We recommend a 5/4/3 wetsuit or a hooded 4/3 with boots and gloves. During that season the water is without a doubt the coldest. From March to April, the water temperature goes up to 13 degrees. We continue with the same recommendation for wetsuits; 4/3 or even 5/4 depending on the outside temperature.

From May to June, the temperature goes up to 15 degrees. We can leave the 4/3 mm in the wardrobe and go to a 3/2. The best neoprene 3/2 mm wetsuit that we´ve tried is the O´Neill Hyperfreak Comp 3/2 mm. A wetsuit that has captivated us after trying it out and which review you can read in our wetsuit section or clicking here.

From July to August, the season in which the water is warmest (19-21 degrees), we recommend a 2/2 mm like the Hammer from O´neill. The sunny days, when the outside temperature is 30 degrees, you can even abandon the wetsuit and just go in your swimming trunks.

September and October apart from being the best season for waves  in the whole year, also has great outside temperature and a water temperature of 17 degrees. Around this time you can get a 3/2 or a 2/2 and not feel the chill in the water.

Finally November and December. Apart from having shorter days, the water temperature lowers to 14 degrees. Time to get the 4/3 out of the wardrobe.

If you have any doubt, consult us or visit our wetsuit recommender.

When the waves are flat you can add a visit to the Guggenheim, or the already mentioned San Juan de Gastelugatxe, or lose yourself in the historic city center of San Sebastian while trying out their famous pintxos bars of the area. Other essentials of the Basque coast are the villas of Lekeitio, Bermeo, Getaria, Zarautz u Hondarribia. In between surf sessions, a good steak and a good txakoli (the white wine of Euskadi that has 3 protected denominations of origin)

Of course a walk through the cliffs of Basque Country couldn’t be left out. The rocky geography of the Basque coast is worthy of a movie scene. It´s to be expected that the hit series Game of Thrones had set their eyes on these cliffs to shoot their scenes for their seventh season. Barrika, San Juan de Gaztelugatxe and Zumaia were 3 of the places chosen for Game of Thrones in Euskadi. Three places than are now part of the touristic route for Game of Thrones in Basque Country. This next video, recorded using a drone, shows the spectacular images of the enclave chosen to give life to the characters of George R.R. Martin

Where to eat in Basque Country

What better than combining a surftrip with a good gastronomic route. If Basque Country is known for something apart from its beaches, it´s its gastronomy. En the post Surf and gastronomy in Basque Country we talk to you about some of the best restaurants near the waves in the emblematic Basque coast. 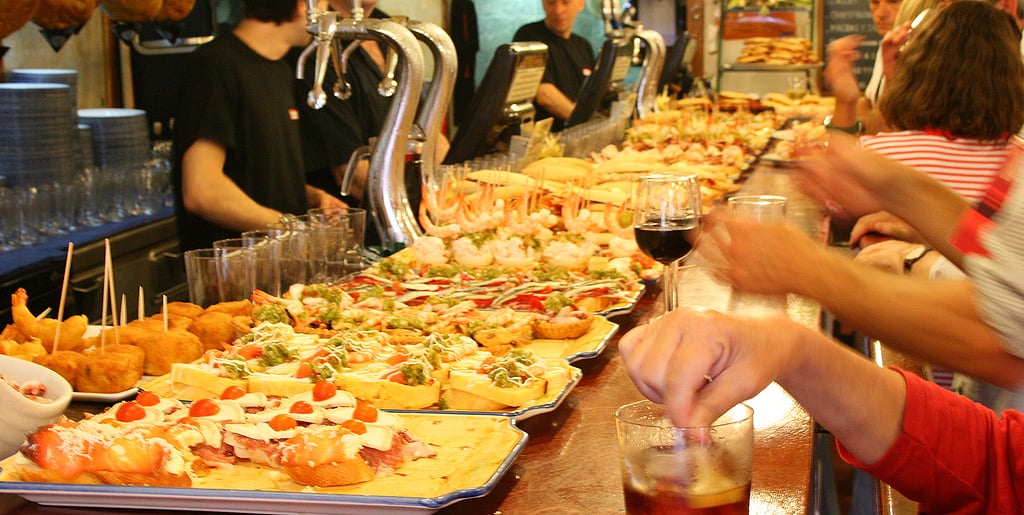 If you liked this article please share it, give it a like or subscribe to our newsletter. Don’t miss the latest in our surftrip section. Apart from having the best surftrip guides we also have airline guides to travel with you surfboards and the best season for each country for waves. 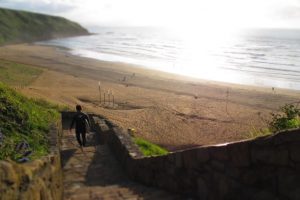 THE 5 BEST BEACHES TO LEARN TO SURF IN BASQUE COUNTRY 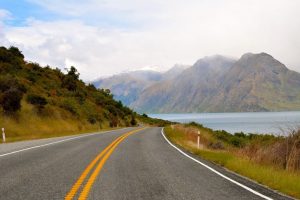 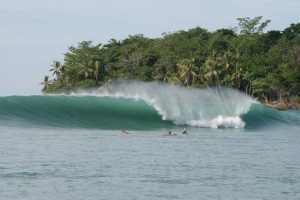 The 5 best waves for February